For a taste of Ireland in Fisherman’s Warf, Tiernan’s Irish Pub offers guests an extensive food menu that features Irish cuisine alongside live music, and a full bar with over thirty beers on draught. Appetizers such as the Guinness Steamed Mussels and the Irish Nachos feature a decidedly Emerald Isle touch to standard pre-meal favorites. In addition, this Irish gastro pub provides other dishes such as the Fettuccine Supremo, Penne Napolitano, and Capellini Fresca, which can be ordered vegan. So if you have someone with certain dietary restrictions, Tiernan’s can accommodate those needs. Featuring nearly a dozen traditional Irish favorites such as Shepherd’s Pie, Corned Beef and Cabbage, and Whiskey Braised Pork Shoulder, Tiernan’s stays true to its Irish roots. Should you find yourself in Fisherman’s Warf in want of live Irish music while you enjoy a pint of Guinness, Tiernan’s Irish Pub is a good choice. 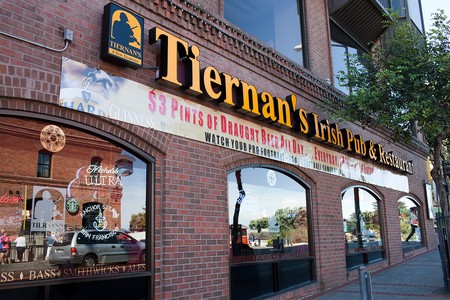