It may be surprising to find a fine dining restaurant that specializes in familiar flavors when so many chefs prefer the exotic, but Town Hall takes the good ol’ American meal to its highest peaks. A large dining room designed to feel like an old school house provides an ambiance as comforting as the food. Executive Chefs Mitchell and Steven Rosenthal along with partner and maitre d' Doug Washington, share their love for refined tradition with dishes like Buttermilk Fried Chicken and Peanut Tasso Crusted Pork Chop. Some diners may even forget the surrounding skyscrapers of SOMA, San Francisco.

It may be surprising to find a fine dining restaurant that specializes in familiar flavors when so many chefs prefer the exotic, but Town Hall takes the good ol’ American meal to its highest peaks. The high-class, low-key restaurant  epitomizes the American standard: great food without the pretense. Of course, you’ll find most diners dressed to the nines and a refined wine list to match. The elegant dining room has the charm of a warm cottage on a cold night, and this charm made me wholly forget that I was, in fact surrounded by skyscrapers in SOMA, San Francisco.

Walking through the 20-seat patio and into the restaurant, diners are greeted by a waiting area and a bar, which is often filled. The restaurant also offers a 40-seat private dining room for events and special occasions. Past the bar is an 80-seat, open dining room, lit by antique chandeliers salvaged from an old movie theater in Spanish Harlem. Beneath their warm glow, the Adirondack tables and chairs made of solid wood  project a sturdy feel. From the first moment I sat down, I felt that I was in good hands: our waitress arrived promptly with menus designed by executive chefs, owners and brothers, Mitchell and Steve Rosenthal.

Executive Chefs Rosenthal opened Town Hall in November of 2003 along with Doug Washington who’s many years of service at Wolfgang Puck’s Postrio restaurant in downtown San Francisco has earned him a reputation for accommodating the needs of every diner. In fact, all three owners met while working at Postrio, where the Rosenthals were executive chefs and Washington a maitre d’. They have since made Town Hall one San Francisco’s best known restaurants.

Each partner fulfills an important element of the restaurant. Mitchell Rosenthal keeps Town Hall’s menu conceptually familiar, with dishes like Buttermilk Biscuits and Johnston Family Country Ham served with red pepper jelly and Peanut Tasso Crusted Pork Chop with delicata squash, apple butter, cavelo nero and pomegranate. His background in photojournalism aids him in producing eye-catching presentations. Steve Rosenthal focuses on the precision of each plate: for example, the red wine ham hock jus that comes with the Sautéed Dayboat Scallops perfectly complements each component of the meal, from the scallops to the napa cabbage to the sweet potato puree. While the executive chefs’ personalities shine through their dishes, the front of the house benefits from the experience of Doug Washington, who walks around to see that each guest is well cared for. Washington personally coaches the wait staff and his effect can be clearly felt: every time I’ve eaten at Town Hall, the waiters and waitresses couldn’t have been more accommodating.

The large wine list is organized by grape variety rather than world region, offering grape variety, then style, and finally price. The list of around 100 bottles is composed of several half bottles, a brief selection of sparkling and champagne, a moderate selection of white wines, a couple rosés and a large selection of reds. Few wines were listed over $100, but a cellar list of rare and small production wines is available for those looking for just the right accompaniment for the meal at any cost. A section of the menu titled “Going, Going, Gone…” gives diners a last chance to order quickly disappearing bottles, but don’t be surprised if the wine you order has sold out. A full bar is also available, and Washington has been known to run to the nearest liquor store to supplement his inventory when a diner requests something he does not have.

The dinner menu changes regularly, sometimes daily, and is divided into Starters, Main Courses, and Sides. The extensive list of dishes and ingredients is like reading a good book, with each dish providing a new chapter.

Although it seems strange to have breakfast for dinner, we began with Town Hall’s signature dish, Faith’s Warm Ham and Cheese Toast with poached egg and jalapeño cream. A more rich and fulfilling dish is hard to imagine. It looked like traditional eggs Benedict , served in the center of a round plate with the cream sauce spilling over. The egg and toast seemed to simply be accompaniments for the jalapeño sauce, which captures the flavor, not the heat, of jalapeño extraordinarily well. Rich and warm, this is comfort food at its finest.

Next, we tried the Sweet Onion Vermouth Fondue with green beans, house-made pretzels and andouille sausage. It came in a raised ramekin with a candle beneath it, with the other components piled on all sides. The rich texture of melted gruyere cheese combined with the tangy sweetness of a good French onion soup. With each bite, this flavor slowly melted away to reveal the delicious green beans, pretzels and sliced sausage. While the pretzels seemed designed only to carry the cheese, themselves being quite bland, the andouille sausage came into its own after the fondue melted away, revealing fennel and spice. The green beans were a light, healthy accompaniment, adding a surprisingly pleasant balance to the otherwise heavy dish.

The Cornmeal Fried Oysters arrived, stunningly presented. The five battered oysters came on the half-shell on a bed of spinach, Herbsaint puree, each with a piece of bacon and a slice of lemon rind on top. Herbsaint is an anise-flavored liquor originally designed as a substitute for Absinthe. The complex dish is an experiment in profundity, each ingredient bringing its own strong characteristics. The combination of crunchy cornmeal, light oyster, anise-infused spinach and smoky bacon topped off with the pucker of lemon was delicious, but I could taste the effort of the different ingredients. Town Hall’s other dishes taste natural, as if they had no choice but to exist together.

For the main course, my dining partner and I had the House-Made Gnocchi with chanterelles, butternut squash and truffle oil and the restaurant’s famous Buttermilk Fried Chicken. The light potato gnocchi are served in a large white bowl, brightened by the colors of the butternut squash and chard. At the first bite, the truffle oil ignited my palate, and the crunchy squash made for a nice texture amongst the fluffy gnocchi. The whole dish exudes the wonderful melt-in-your-mouth tastes of fall.

The Buttermilk Fried Chicken is a Town Hall signature dish and it is easy to understand why. The chicken was perfectly cooked, juicy and easy to eat and the fried batter was immensely crunchy, yet light. The waitress explained that the chicken is first brined in Tabasco and herbs, then soaked in buttermilk before being slowly fried at a low temperature. This ensures that it will not taste at all burned or dried out. Although the collard greens were rather tough and overly vinegary, the Yukon Gold smashed potatoes with country bacon gravy were an excellent accompaniment.

To finish it all off, we ordered another Town Hall signature, the Butterscotch and Chocolate Pot de Crème. The dish arrived in a medium-sized bowl, a huge portion with a few pieces of chocolate butter crunch stuck in the center. Since it is a signature dish, I was surprised to find that it did not have the richness or the texture that I associate with Pot de Crème. The butterscotch was a nice touch, but overall the dessert was thin and tasted too close to store-bought pudding. Our waitress noticed that we didn’t eat much of the Pot de Crème and, unwilling to let a customer go away unsatisfied, boxed us a piece of German Chocolate Cheese. It was wonderfully thoughtful, and we hadn’t even asked.

As we walked out of the restaurant and saw the Bay Bridge shining bright, I felt restored by Town Hall and its comforting, exquisitely executed cuisine. Washington and the Rosenthal brothers know how to
treat their guests. 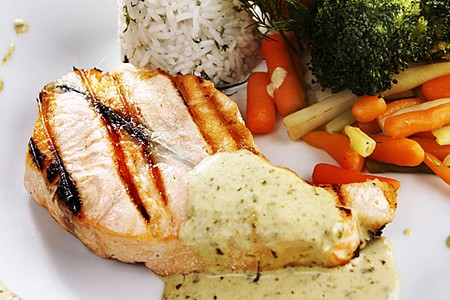