The name of Stamp’s Lane Restaurant comes from a street in the West End of St. John’s Newfoundland. The street was named Stamp’s Lane because the lane ran through a large farm owned by the Stamp family prior to 1950. The area of the farm was rural at the time and eventually became more urban and has been incorporated into the west end of the city of St. John’s.
Will Smeaton is the great-grandson of the owner of the farm. Will’s family comes from St. John’s. Will has visited St. John’s on many occasions and during those visits has enjoyed the local food in many of the restaurants in St. John’s.
Will had an early interest in cooking and would help his mom in the kitchen at every opportunity. When he decided to become a chef, he told his mom that he would name his first restaurant Stamp’s Lane Restaurant.
Stamp’s Lane offers a varied menu but focuses on many of the favourite seafood dishes from the east coast of Canada including the Atlantic Provinces and Newfoundland and Labrador. The menus will change with the season, as is the tradition in many homes of Canada’s East Coast people.

Please call the restaurant (416-537-7750) for reservations for a group over 6. Ignore the online message saying "no reservations available." 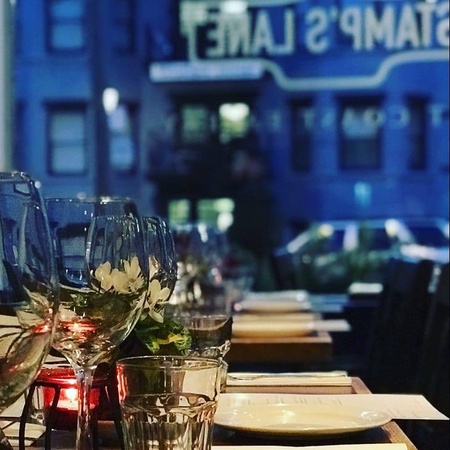