Fugu: A Mortiferous Morsel Sure To Make Your Mouth Tingle 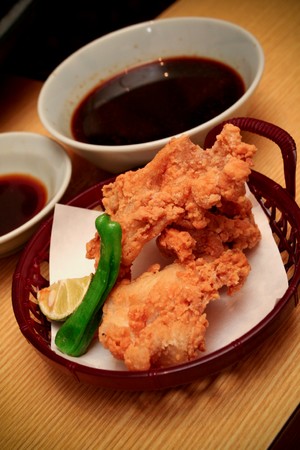 Fugu, also known as blowfish or puffer in the United States, is a Japanese delicacy best recognized for its “killer” flavor. Considered the gastronomic equivalent of Russian roulette, just one of these marine creatures carries enough poison to kill thirty people. Despite this major impediment, many thrill-seekers choose to risk their health—and their lives—for the honor, excitement, and unique taste that the puffer brings them. Described as “a taste given by heaven”, it is no wonder the usually conservative Japanese populace melts at the opportunity to sample this toxic treat.

In spite of its recent notoriety, the consumption of the deadly blowfish is no new trend to Japan. In the 17th, 18th, and 19th centuries, during the time of the Tokugawa Shogunate, blowfish intake was largely forbidden by a strict regime. However, in places such as the western provinces where government influence was weaker and fugu easier to obtain, a range of safe cooking techniques were developed. Following the Tokugawa Shogunate another periodic ban ensued, but in more recent years as government power over the people has diminished, it has seen a resurgence in the seafood market, on restaurant plates, and even in grocery stores. With the exception of the emperor, who is forbidden to taste fugu due to the hazard to his health, any one of the 100 million people in Japan now has easy access to this once proscribed aquatic creature.

Today, fugu is most widely consumed in Japan, at an average of 10,000 tons a year. However, China and the U.S. also import a large quantity of the fish. With an ever increasing trade volume, there are now at least seventeen licensed restaurants in this country (thirteen of which are in New York) who dish up the potentially lethal fugu. Not to worry though— there are strict procedures as to how to ship fugu to eliminate all possible margins for error. It is first cleaned of its toxins in Japan by licensed chefs and then freeze flown in transparent purpose-built plastic tanks. Once it reaches local shores, chefs who have undergone rigorous training serve this now poison-free specialty in five star restaurants for rates as high as $250 for a full course.

In the last few years, strict regulations have been implemented to prevent the depletion of the fugu population in response to the rise in the fish’s popularity. It is now harvested in the spring during spawning season and farmed in floating cages in the Pacific where come winter, when the puffers have fattened up to survive the cold, they are fished and sold to the highest bidder. From the market, fugu is sent to restaurants alive and stored in big fish tanks on display until it is ready to be prepared for an awed audience of audacious and cautious diners alike.

How common are fugu fatalities? Statistically, this puffer pockets 70-100 lives annually, although from that number most are from improper home preparation methods in rural parts of Japan. The deadly poison, tetrodoxin, found in its ovaries, intestines, and liver is 1,250 times more toxic than potassium cyanide, hence the highly methodical procedure of storing fugu excess under lock and key and disposing of it like some radioactive waste. The noxious toxin has no known antidote and can kill its victims in a matter of a few torturous minutes. While the sufferer’s brain will still be processing clearly, he/she will not be able to speak or move, and soon blocked sodium channels in the body will cause an excruciating death by asphyxiation. Still hungry? Didn’t think so.

Despite the potential for harm, many chefs will claim that the puffers’ reputation has been tarnished by inexperienced cooks, and that in the right hands it is as harmless as a goldfish. While the industry does not as of yet have a centralized regulation system to determine licensing requirements for those who wish to serve fugu, getting a fugu license (required in nineteen of the forty-seven prefectures) is a rigorous 2 to 3 year ordeal. The tests vary in their demands but usually require an apprenticeship, intensive courses, written exams, and a comprehensive fugu preparation in front of health officials. Out of those who attempt the taxing process of becoming an honorable chef, only 30% pass the final examinations. Fear not though— the other 70% don’t die trying, but rather simply don’t meet the strict requirements set by the law.

Most recently, scientific advances in research and farming have ascertained that the accumulation of toxins can be prevented by not feeding fugu tetrodoxin-laden bacteria. This has resulted in a mass-produced controversial poison-free globefish which many chefs, traders, officials, and diners alike are reluctant to accept. It seems that many groups have vested interests in the continued toxicity of this funny-looking fish. Most fugu-related businesses are predicated on the fact that it holds such high appeal because it is poisonous. On the other hand, health officials refuse to recognize that eating the illegal fugu liver, the most lethal organ in its body, can be safe. While the Ministry of Health denies any political or economic reasoning for the continued ban, some people suspect that their real motive is to protect restaurants and the jobs of licensed fugu chefs.

Whether fugu status is doomed to the mediocrity of poison-free fish or will continue to thrive under the shadow of its perilous organs, only time can tell.