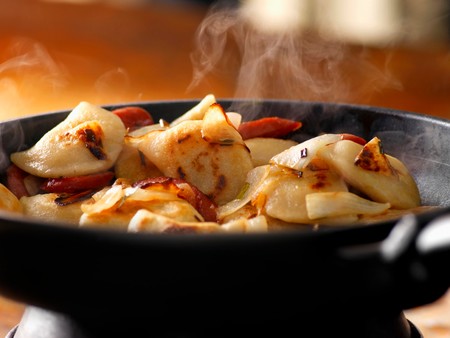 Ramen noodles are an authentic Japanese dish that you can find in Japanese restaurants, but if you’re short on time the instant version will also do the job of filling you up.  With growing world-wide appeal and new innovative but simple ways to dress a bowl of ramen changing the way we see this instant success, instant noodles  has become the famous choice lifesaver for the most drastic of dining occasions.  So whether you’re fishing for something to eat and there’s nothing in the fridge or you’re too ill-equipped to cook at the moment and need an instant food-fix—instant ramen can be that hunger-reliever you’re looking for.  Instant noodles is also a known commodity that has been sent to relief camps throughout the world, and it seems like once again instant ramen has come to the rescue with the convenient food item being sent by the truckloads to Japanese survivors affected by the earthquake and tsunami.

Instant ramen has been the default item people fall back on since the conception of the universally known product.  According to a New York Times article entitled, “Where Steaming Fried Noodles Spells Relief,” instant ramen was created to buffer the Japanese during World War II when Momofuku Ando, a Taiwanese businessman, was inspired by the long lines of starving people waiting to be served fresh ramen by the Osaka government, as well as the government edict that encouraged people to eat bread made from the wheat flour that was donated by the United States.  In answer to the dilemma of the Japanese people, Momofuku engineered a way to mass produce noodles.  With the success of his company Nissin Foods, Momofuku would later gain world-wide appeal in America with Cup Noodles along with its variety of flavors.

Today, instant ramen is considered an easy and accessible product that not only the Japanese can enjoy, cherish, and rely on.  College students as well as office workers around the world snack on this delicious instant treat on a regular basis. Often times taken for granted, instant ramen is the go-to product when you’re in a jam, but if you’re looking for ways to make your noodle soup a little more gourmet, there are cookbooks out there like Chuck O’Brien’s “Chicken-Flavored Ramen for the Soul,” that features thousands of recipes of how to dress your instant dish up. Other ways you can upgrade your ramen is by making use of the condiments and spices available in your cabinet.  Chili flakes, miso paste, and/or harrisa would be other great additions.

According to the press release on the organization’s website, World Instant Noodles Association (WINA) has decided to donate a total supply of 200,000 packed instant noodles to the disaster hit areas of Japan.  WINA was founded in 1997, and meets annually at a summit based in different locales around the world. At the 6th WINA Summit held in Osaka in 2008, the association established the “WINA Disaster Relief Fund,” which shipped instant noodles as an emergency ration to victims suffering from natural disasters around the world. For instance, WINA donated 128,000 servings of instant ramen to the survivors of the earthquake that devastated Haiti in 2010.

Not just valued for its convenience, instant noodles are also universally viewed as a food that is capable of bestowing comfort and a full-stomach in times of dire need. Currently shipped by the truckloads as a relief item for the Japanese earthquake and tsunami survivors, instant ramen was initially a food item that was created to provide relief for the Japanese.  Hopefully, this past safeguard during hard times will continue to serve its purpose by bringing comfort and substance to a nation on the road to recovery.

An Interactive Guide to Las Vegas BuffetsAn Overview of India's Regional CuisinesKeep It Chill For The Sake Of Your Health!Foie Gras: Savory Delicacy or Gourmet Cruelty?Unearthing the Truffle: A Guide Through Truffle 101 More Articles ...