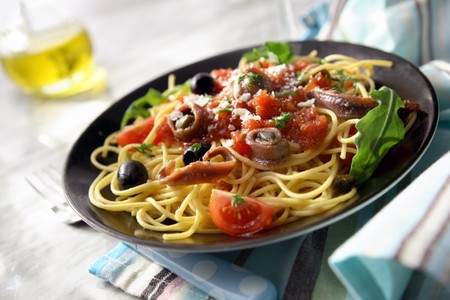 Substantiated by the theory that taste buds were formulated to detect a specific taste, it has been widely understood, until recently, that sweet, salty, sour, and bitter constitute the four distinguishable, and therefore, official tastes. However, in the early 1900s a Japanese scientist isolated a new flavor that has recently been officially recognized as the “fifth taste.” Umami, the name of this long unrecognized taste, can be found in a number of foodstuffs throughout the world. Its acceptance and recognition give a new depth of description to our culinary lexicon and an increased awareness of the chemical complexities of cooking.

The Discovery of Umami

In the early 1900s, a Japanese scientist named Kikunae Ikeda began noticing distinct flavor similarities between the different types of food he consumed, a taste sensation that was distinct from the scientifically established four tastes. By examining the chemical structures of different foods, Professor Ikeda discovered an elusive, but distinctive taste. It was in konbu broth, a traditional Japanese broth made from kelp, where Professor Ikeda was able to extract glutamate, the source of the fifth taste he had noticed. Motivated first by intellectual curiosity, and ultimately by the potential for profit, Professor Ikeda was able to isolate the taste, which he dubbed “umami” or “deliciousness,” and the free form glutamate responsible for it which he later marketed as the popular flavor enhancer monosodium glutamate (commonly referred to as MSG). Although the savory, mouthwatering flavor of MSG has been flavoring a multitude of food products ever since, umami itself was not given official recognition for several decades.

The debate about umami’s authenticity hinged on the difference between taste and flavor. A taste is based on a single sensation, whereas flavor is the combination of multiple sensations experienced simultaneously. Umami’s controversy lay in determining whether it was the result of multiple sensations, or could be detected singularly. In the 1950’s, amid the popularity of Ikeda’s monosodium glutamate, umami was considered to be a flavor enhancer because scientists believed it could only be detected in the presence of other flavors and, therefore, wasn’t a legitimate taste. In 1990, however, umami was finally recognized as a distinct fifth taste at the International Symposium on Glutamate. In 2006, University of Miami neuroscientists were able to locate the taste-bud receptors for umami, further validating the existence of the fifth taste. It has been gaining in credibility and notoriety ever since.

Umami: What is it?

Umami is a savory or meaty flavor that is produced by free form glutamate, a particular amino acid that produces the umami taste only when it is not bound by other amino acids. Umami in certain foods is enhanced by the break down of their glutamates, which occurs during the processes of fermentation, aging, curing, and even normal ripening. It is a subtle taste that is often more detectable as a flavor enhancer to other food elements than as an isolated taste. Umami is described by Marcia Pelchat, a sensory psychologist at Monell Chemical Senses Center in a San Francisco Chronicle article as “that meaty, mouthfilling, savory sensation.” As with the other four tastes, it is difficult to describe umami without identifying representative umami foods.

A wide variety of foods exhibit the taste of umami. We get our first taste for umami in infancy: breast milk contains glutamate, and therefore is umami rich. A few vegetables taste strongly of umami. Tomatoes, artichokes, asparagus, and mushrooms are all rich in umami. Shiitake mushrooms are very identifiably umami, their meaty, savory taste most clearly identifiable when they have been dried, reconstituted, and then cooked into a broth. Seaweed and kelp taste strongly of umami, most notably when made into konbu broth, which served as the vehicle for umami’s discovery by Professor Ikeda. As can be expected, the “meaty” taste of umami can be found in a variety of meats including beef, veal, and many varieties of seafood, such as shellfish, sardines, anchovies, and mackerel.

The umami in many foods is accentuated once their glutamates have been broken down through the processes of fermentation, aging, or curing. Soy sauce, a sauce made from fermented soy beans, is rich in umami. Aged parmesan and gruyere exhibit a greater amount of umami than fresh cheeses. Aged beef also has more umami than fresh ground beef, while prosciutto has more umami than uncured pork. Broths tend to be stronger in umami than their uncooked counterparts: the umami of veal, shiitake mushrooms, and seaweed are all more heavily concentrated when they are cooked into a broth. Even the ripening process for fruits and vegetables elevates their umami: a ripe grapefruit will exhibit more umami than an unripe one.

The growing recognition for the fifth taste in the culinary world has attracted attention among wine aficionados. For wine lovers, the discovery of umami was a missing link, explaining why certain wines couldn’t be paired with particular dishes. This has resulted in a veritable umami revolution, led by Master of Wine, Tim Hanni. Hanni, whose extensive writing on the topic of umami and wine has earned him the playful nickname the “swami of umami,” has transformed the way certain chefs, sommeliers, and wine producers view wine pairing.

Hanni and his fellow umami enthusiasts argue that the discovery of the existence of umami has made it possible for any type of wine to be paired with any dish, with a few minor adjustments to cooking style and wine list presentation. Dishes heavy in umami, like sweet dishes, heighten the bitter, tannic flavors of wine. Umami-rich dishes will mask the umami flavors of some wines just as sweet dishes overpower the natural sweetness of certain wines. This reaction can be resolved by the addition of salty or acidic elements: a pinch of salt and some lemon juice squeezed over a scallop dish will balance the dish’s umami and serve as a foil to the umami in the wine. By focusing more on balancing the five tastes and creating an flavorful equilibrium, Hanni and his culinary cohorts contend that the boundaries of wine pairing and cooking can be broadened, creating more adventurous pairings and unique flavor combinations.

The discovery and gradual legitimizing of umami has opened up an exciting new avenue for culinary play. As chefs, sommeliers, and enthusiasts explore the uncharted territory of umami’s many applications, our understanding of this new addition to the taste canon, and taste interaction in general, deepens in surprising and delicious ways. The next time you sit down to a hearty bowl of mushroom soup, a savory steak, a Caesar salad rich in anchovies and parmesan, or a sun-ripened tomato, remember to relish its mouthwatering and delectable umami.