An Introduction to Mushrooms 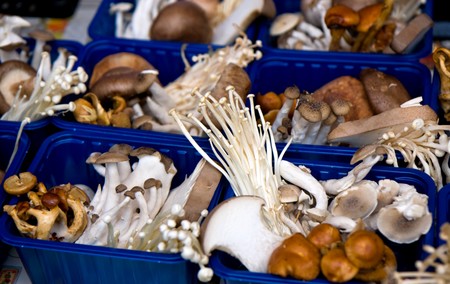 Mushrooms are a staple of a variety of different culinary traditions and one of the few fungi that we are happy to see when we look inside our refrigerators. Although historically humans have consumed a diverse array of mushrooms for nutritional and medicinal purposes, it is only in recent years that this diversity has been brought to the foreground of culinary practice. As commercial cultivation improves, and global markets expand, the variety of readily accessible mushrooms has increased substantially. This can be daunting for the novice mushroom consumer, who is faced with a staggering number of foreign fungi to wade through. When approached with an adventurous spirit, mushrooms can be an exciting, and delicious exploration of a veritable garden of earthly delights.

Agaricus mushrooms, also known as white or button mushrooms, are the most commonly available, and widely cultivated variety in the world. These round, smooth mushrooms are typically white or beige and vary in size from small (“button”) to jumbo size. Their flavor is relatively mild, especially when eaten raw. When cooked, their woodsy mushroom taste is enhanced. They are used in a variety of different culinary ways and are a versatile mushroom, although not as flavorful as some other varieties.

Also known as cremini, Italian, or brown mushrooms, criminis are closely related to agaricus mushrooms. They have a similar shape and size as white mushrooms, but are brown in color. Their flavor is slightly stronger and earthier than their relative’s. They are used similarly to agaricus, but are more often stir fried, stuffed, steamed, sautéed, roasted, or stewed. These mushrooms taste like a more intense agaricus, imparting a slightly more intense flavor.

Portabellas, also referred to as portobellos, are the mature versions of crimini mushrooms. They are the largest of the edible mushrooms, growing up to 6 inches in cap diameter. Portabellas have a round cap and a brownish-tan color. Their gills are more visible than other mushrooms, as a result of their greater maturity. They have a meatier texture and taste than other mushrooms and make an excellent vegetarian substitute for beef. They are commonly grilled or sautéed, whole or in large slices, and added to sandwiches or pizzas. They marinate well, and are good stuffing mushrooms because of their size. Their hearty flavor enables them to handle stronger accompaniments like blue cheese and balsamic vinegar.

Chanterelle mushrooms have a distinctive vase-shape with curled edges. The gills are prominently featured on the underside, although they are not as substantial as portabella gills. Chanterelles come in a spectrum of colors, most commonly white, yellow, or orange. They have a nutty, sometimes mildly peppery taste and a delicate texture. Their subtle flavor makes them a suitable pairing for eggs, chicken, and fish. Their nutty taste can also handle heavier meats like beef, veal, or venison, which they commonly accompany in European dishes. They are also used in risottos, crepes, or as a topping on pizza.

Shiitake mushrooms, also known as Chinese, oak, black forest, and golden oak mushrooms, are more readily available worldwide than other Asian mushrooms. They have a distinctive umbrella-shaped cap with a thin, woody stem. Like portabellas, shiitakes range in color from tan to dark brown and have open “veils,” or visible gills. They have a soft, slightly spongy texture, and a strong, meaty, woody flavor. They are an excellent vegetarian meat substitute, and have long been used in this capacity in Asian cuisine. Shiitakes are most often stir fried, but are also used in pasta dishes. While their stems are usually removed because of their tough texture, they can be boiled to make strong, rich stocks.

Oyster mushrooms have a delicate texture and taste similar to chanterelles. Named for their faint resemblance and, according to some, slight flavor similarity to oysters, these mushrooms are a mainstay of Japanese and Chinese cuisine. They have perhaps the most color diversity of all of the edible mushrooms: white, yellow, pink, grey, brown, and black oyster mushrooms are common and prevalent. The distinct flavor or oyster mushrooms make them a delightful accompaniment to seafood and shellfish, although they also pair well with other meats like chicken. They are usually stir fried, but also take well to braising, sautéing, and stewing. They are also excellent raw.

Enoki are the smallest of the edible mushrooms, growing in tight clusters of long, yellowish, beansprout-like stems with tiny white caps. Unlike other edible mushrooms, enoki do not cook well; when used in cooking they are added at the last minute to prevent toughening. They are an ideal raw mushroom, making a satisfyingly crunchy addition to salads, sandwiches, and as a whimsical garnish to a variety of dishes.

Also known as king bolete, porcinis resemble fairytale toadstools, with thick pale stems, wide, spongy, brown or reddish-brown caps, and porous undersides in place of gills. Their meaty, nutty flavor lends itself well to a variety of dishes. They are a popular ingredient in Italian, Provencal, and Thai cuisines, adding depth to stews and stocks, a nutty flavor to pastas, and a meaty texture to salads.

Morels are the most unusual looking, and readily identifiable of wild edible mushrooms. Their nut-brown, cone-shaped, honeycomb-like cap and short stem distinguish them from other mushrooms. Like shiitake mushrooms, morels are often dried for commercial sale. Their distinctive sweet earthy flavor makes them an excellent flavor enhancer for sauces, however, morel enthusiasts often fry them, or use them in warm salads. Although morels have long had a cult following among mushroom hunters, they have more recently become a prized delicacy in haute cuisine akin to truffles. Although featured in a variety of different types of cuisine, they are most often found in French dishes.

Perhaps the most coveted of fungi, truffles have a long history as a culinary luxury. Unlike other mushrooms, truffles are subterranean fungi that bear little resemblance to their other edible brethren. They are round, knobby, and irregular in shape, and can be as small as a walnut or as large as a human fist. The most well-known and highly regarded truffles are the French black truffle, and the Italian white truffle, although several regions around the world harvest their own endemic varieties for culinary use. The Oregon white truffle is a regionally popular variety that has recently developed notoriety for its excellent flavor and wide availability, and is fast becoming a substitute for the rarer European varieties. Truffles are perhaps the most pungent of the edible fungi, with a strong earthy scent that can fill a room. They are used sparingly in cooking almost like a spice, often grated or minced and added to oil or butter to flavor a dish.

Although many mushrooms resist captivity and can only be found in the wild, a variety of edible mushrooms are commercially cultivated. All of the above listed mushrooms are currently farmed, bringing a wider fungal bounty to national and international markets.

Mushroom farming relies on controlling the temperature and humidity of the growing environment, and providing the desired fungi with an appropriate organic substrate for it to feast on. For many mushrooms, wood is ideal, however, many commercial farmers use a variety of carbohydrate-rich substances depending on the type of mushroom they are cultivating: sawdust, hay, corncobs, recycled paper, brewer’s grain, coffee grounds, soybean meal, and urea are all used in bulk to produce mushrooms. To combat contamination by pests and microbes, which can result in failed production, mushroom farmers sterilize the growing substrate to destroy any bacteria.

A mushroom’s growth cycle begins when tiny spores are released from the gills of parent fungi that then grow into mycelium, a network of fibers that seek out nutrients deep under the soil’s surface. These mycelia release enzymes that break down organic compounds, providing fungi with nutrients. It is only when the mycelium has stored enough carbon and nutrients that the fungus produces its fruiting bodies, which are the recognizable and edible components of mushrooms.

Since our hunter-gatherer origins, humans have been scouring forests for mushrooms as a tasty and nutritious dietary component. Mushroom hunting is a finely honed skill, requiring specialized knowledge of the growing patterns, ecology, and potential hazards such as toxic environments and poisonous species.

Mushrooms typically grow in moist, temperate forests where there is a significant amount of decomposing matter for them to feast on. Morels and oyster mushrooms are particularly popular for mushroom hunters because they are easy to identify, resemble few toxic varieties, and have distinctive growing patterns. Other mushrooms are not as easy to identify and gather. Truffle hunting proves especially daunting because their fruiting bodies grow underground. Truffle hunters use specially trained dogs and pigs to sniff out the distinctive odor of hidden bounties.

Although mushroom hunting can prove difficult and potentially harmful for amateur gatherers, experienced mushroom hunters reap the rewards of their knowledge, benefiting from a wide cornucopia of fungal edibles that have yet to reach commercial markets.
A feast of wild mushrooms is one of the few vestiges of our hunter-gatherer beginnings, a surprisingly ancient practice in our industrial food marketplace.

Keep It Chill For The Sake Of Your Health!Wine and Plastic Cups: Not a Perfect PairingTo Your Health Part 5: Get Some Sleep!Discovering German CuisineSmoke on the Water...in Your Cocktail? More Articles ...