Serving Our Kids a Healthy Future 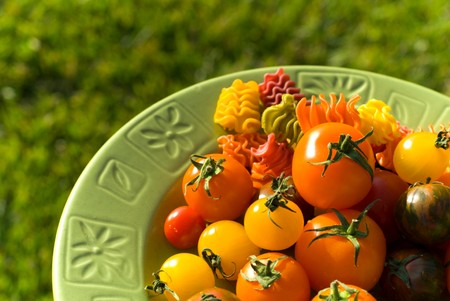 You want me to eat what?

The way we eat has been the topic of discussion, and controversy, for years. The ebb and flow of diet crazes reminds us that improvement is always to be had in the health department of our daily lives, and the ever-growing enthusiasm for nutritional supplements and other “remedies” entice many of us with the promise of an easy fix. Thousands of adults admit they know better than to eat the way they do, but what about our kids? How do we reconcile our own subpar eating habits with the need to teach our children to lead healthy lifestyles? This very discussion has found a platform for discussion in local communities, national politics, and has even stolen the spotlight across the pond. From First Lady Michelle Obama’s White House vegetable garden to our neighborhood school cafeteria lunch table, it seems piquing kids’ interest in healthy food is on everyone’s mind.

Medical research discussing the futures of our children’s health is difficult to ignore, and must be taken to heart. MedlinePlus, published by the National institutes of Health and the National Library of Medicine, discusses some of the startling statistics associated with childhood obesity. Keith Ferrell writes in the MedlinePlus article “Reducing Childhood Obesity” that “The percentage of children and teens who are overweight has more than doubled in the past 30 years. A total of 17 percent of American children ages 2 to 19 are overweight or at risk of becoming overweight.” Lifestyles have changed dramatically in the last thirty years as our children rely increasingly on sedentary forms of entertainment and have fewer chances to exercise in a school setting. And while numerous factors play into why our kids are packing on the pounds, their dietary habits provide major clues into what’s going wrong, and what can be helped. Terry Huang, M.D., explains, “You can't just encourage kids to take responsibility when the context of their lives actually works against them taking that responsibility." In order to encourage children and young adults to be more proactive in making healthy life choices like choosing more fruits and vegetables over snacks like chips and soda, various organizations and community groups are joining forces to reestablish order in an otherwise chaotic eating world.

The little vegetable garden that could

The most recent and poignant image of children taking charge of their diets may be found in Michelle Obama’s vegetable garden. In March, The First Lady invited a group of 5th graders from Bancroft Elementary School to come to the White House and plant an organic kitchen garden. Three months later, the garden was primed and ready for harvest. The students returned to their garden to reap the benefits of their hard work with a tasty healthful meal of salad, baked chicken, and brown rice. These pint-sized farmers may have enjoyed this experiment in horticulture, but Mrs. Obama ultimately hopes to reach a much larger audience. The First Lady said of the gardening experience:

This gorgeous and bountiful garden has given us the chance to not just have some fun, which we've had a lot of it, but to shed some light on the important -- on the important food and nutrition issues that we're going to need to address as a nation.  We have to deal with these issues.

Obama realized the importance of a healthy diet after her own family began to feel the effects of eating too much fast food. She noted, “By making this small change in our family's diet and adding more fresh produce for my family, Barack, the girls, me, we all started to notice over a very short period of time that we felt much better…” Perhaps no one can argue with the fact that the White House garden experiment was a success, but how does it translate into helping the rest of the country?

Jane Black of the Washington Post recently explored the possibilities and implications of the First Lady’s plans for Americans’ nutrition in her article, “The Next Course: Why Children Are Key Players in Michelle Obama’s Food Policy Moves.” Black notes the issues and potential for backlash that go hand-in-hand with telling Americans how to eat. She explains, “Food -- unlike, say, the space program -- is a fundamental and intimate part of everyone's life. It's culturally, politically and economically complicated.” Black adds, “The challenge now is to craft a strategy to capitalize on Obama's newfound clout to improve school lunches and access to fresh fruits and vegetables and to make how we eat an integral part of the national health-care debate.” Indeed, it seems crafting a strategy to alter the eating habits of millions of American children may be a tall order.

Fresh and healthy food continues to carry the stigma of being expensive and out of reach to millions of Americans. Everyone may like their kids to have access to locally harvested produce, but for thirty million children living in low-income households the meals they eat at school provide their main source of daily nourishment. The USDA’s National School Lunch Program is responsible for providing low cost and free meals to eligible children that may otherwise go without. Strict guidelines are in place to regulate the nutritional value of meals served under the program, but many argue that it’s not enough. Proponents of the sustainable food movement, for example, would like to see more farm-to-school programs develop to create new markets for small farms while getting fresh produce to kids. And though Obama’s team does not outwardly support such programs, she is expected to launch an aggressive campaign in September to address Congress’ funding for child nutrition programs.

To eat a reconstituted turkey patty or a carrot; that is the question

As we begin to investigate and establish new regulations for our children’s eating habits, it may help to note the successes and letdowns of similar programs that have passed in other countries. Four years have passed since the British government instituted unprecedented funding increases for healthy school food. The campaign, which was spearheaded by the Naked Chef himself, Jamie Oliver, has almost doubled the amount of money committed to each student’s school lunch. Mr. Oliver championed his crusade for healthy school fare by first gaining the attention, and horror, of the masses with his four-part series, “Jamie’s School Dinners.” The series profiled twelve schools in the London borough of Greenwich, and documented the process of weaning students off their steady diet of burgers, chicken nuggets, and chips. Philippe Naughton of the British website, Times Online, writes of the influential television show, “The series touched a nerve with parents… forcing school heads, governors and local education authorities onto the defensive about the quality of food served to pupils.” By marketing the issue to the public first, Oliver successfully laid the groundwork for a discussion no one would let officials forget.

2007, two years after the school food funding increases were implemented, saw the results marketing would play in the ultimate success of Oliver’s campaign for healthy fare. Polly Curtis writes in her 2007 article, “Children Find Jamie Oliver’s School Food Hard to Swallow, Say Inspectors,” for the online British publication The Guardian, that students across the country have yet to be swayed to forfeit their greasy chips and burgers for salads and pastas. She explains, “There was still an image problem in the dining hall and even Jamie Oliver's menus had failed to make it cool to eat in school.” According to the investigation that involved twenty seven schools, students and their parents were not fully convinced about the new and improved school menus. Evidently, “Schools which have marketed their menus have done much better. You have to persuade children that the school food is cool to eat… Children are conservative and need convincing." Fortunately, the investigation also found that schools that actively encouraged their students to participate in the menu planning and incorporated the issue into their daily work were successful at getting their students to embrace the change.

It seems simply plating lovely green salads for our kids may not be enough to keep them on the track of maintaining healthy lifestyles. Looking back at the trials and triumphs the British government has faced in altering the mindsets of its citizens about food, we can learn how best to reach our kids in a meaningful and lasting way. By strategically marketing healthy eating habits to children early, we may ensure the message outlives their iPod battery life. From getting their hands dirty in community gardens to contributing to the family’s grocery list, there are many ways to prepare future generations to take a proactive role in their own health.

Is Your Plate Half Full or Half Empty?Unearthing the Truffle: A Guide Through Truffle 101Guide to Tipping at RestaurantsWhat Not to EatOvercoming Food Aversions: How to Become a Successful Omnivore More Articles ...