THIS RESTAURANT IS NO LONGER OPEN FOR BUSINESS. - Georges on Fifth offers two things not common in the San Diego restaurant scene: dining in the company of San Diego’s elite and a twelve-ounce Prime Filet Mignon of Certified Angus Beef ®. The first takes the form of a vibrant mural of accomplished San Diegans which adorns the restaurant’s two-story walls; the latter is one of the most exceptional cuts of meat in the city. Georges’ menu, with culinary highlights that include USDA Prime steak, day boat scallops, and the highest grade sushi, prioritizes quality ingredients highlighted by beautiful presentation. Factor in its unique location in a former gambling hall and saloon in the Gaslamp, elegant historic private dining rooms and Grammy-nominated pianist Tom Barabas performing on weekends, and you have one exceptional dining experience.

Georges on Fifth sits on the ground floor of one of the most photographed buildings in the Gaslamp quarter, occupying a notable historical space. In the 1880’s the restaurant was home to Wyatt Earp’s (then-legal) gambling hall and saloon, The Oyster Bar.  Today, Earp’s presence permeates the restaurant, from the giant mural of his likeness overlooking the bar to the preserved card room where he dealt cards, which now serves as a private dining room offering an unrivaled view of Fifth Avenue.

Upon arriving at Georges’, we received a gregarious greeting from George L. Harrington III, the restaurant’s owner and namesake. He led us through the gentle curves and bold colors of the main dining room to a plush semi-circular booth against the building’s original brick wall.  We passed by the grand piano where, on weekends, Grammy nominated pianist Tom Barabas graces Georges on Fifth with his talents.

Seated, our eyes were drawn to the dramatic two-story walls, which are adorned with vivid portraits of significant San Diego personalities. Wyatt Earp is in good company--figures from Dr. Seuss to Dr. Salk have been painted on the walls by former Disney and San Diego Zoo portrait artist John Wismont. After testing our knowledge of the accomplishments of various San Diegans, we turned our attention to the menu.

The menu at Georges focuses on quality, epitomized by a commitment to serve only USDA Prime steaks. Georges’ generous selection of Prime steak cuts are joined by a seafood selection of equal quality, as well as veal, lamb, pork, duck, and free range chicken.  Our server, Kirsten, enthusiastically recommended many of George’s Signature Dishes, all starred on the menu, highlighting the Grilled Pork Chop and the Prime Filet Mignon as staff favorites.

It is because of these Signature Dishes that Harrington is reluctant to call his restaurant a steak house, although steak and seafood are what Georges on Fifth is known for.  The menu refuses to conform to the traditional “steakhouse way” of serving unadorned entrees while offering vegetables and starches a la carte. At Georges, while the selection and preparation of meat receives enormous attention; equally doted on are the accoutrements and, not least of all, the presentation.  Executive Chef Jose’s Kelley’s talent lies in his ability to focus on appearance and flavor simultaneously without detracting from either.

We started our meal with a sampling of signature starters, along with a glass of medium-bodied 2003 Chalk Hill Estate Chardonnay, which proved a well-suited accompaniment. Kirsten first brought us Dungeness Crab Cakes drizzled with a colorful array of sauces—red bell pepper cream, classic béchamel, and delicate chive oil. The aroma of the two crab medallions wafted up to awaken our senses as we eyed the festive dish.  With each bite a delicate crunch gave way to a creamy center that resonated with intense flavor.  The red bell pepper cream was sweet and rich, while the unique flavor of the chive oil offered a subtle bitterness.

Next we sampled the California Seafood Bisque, which again delighted our eyes before our palates.  The rich golden soup was populated by a New Zealand green-lipped mussel, a solitary prawn, and a small square of salmon, all aligned as if they were marching across the bowl.  To their side an unassuming poppy seed crouton floated atop the viscous soup.  The soup itself was rich with flavor yet somehow not that heavy, offering up a creamy essence of the sea with each bite.

While many of the salads looked appealing, we decided we could not pass up the Tower of Tropical Tuna Tartare, which upon arriving confirmed our decision.  The dish was beautifully plated, running the gamut of colors and textures. A thin layer of sauces coated the plate in a prism-like effect, with brown hosin glaze fading into golden citrus ponzu fading into light green chive oil.  Crowning the plate was a lively bright pink stack of saku tuna topped with a pale layer of pineapple, deep green seaweed salad and an explosive nest of crunchy wontons.  We found ourselves reluctant to dig in, not wanting to disrupt the beautiful presentation. But dig in we did, and we were delighted.  The saku tuna, which is sushi grade yellowfin from the underbelly, was more flavorful than most sushi.  Firm, with a satisfying give and bursting with flavor, we almost forgot it was uncooked. My date, ordinarily not a tartare fan, was especially surprised at how much he enjoyed the dish.

We next turned our attention to the entrees, but not before chatting with the sommelier.  Rick Bates joined Georges on Fifth about two months ago, bringing expertise from the Napa Valley Grille and the Yard House in Irvine.  His first move was to revamp the wine list to provide an accessible selection of familiar wines alongside those from lesser known vineyards, hoping “to introduce folks to wines they might not try.”  At Rick’s recommendation, we opted for a 2002 Chalk Hill Cabernet Sauvignon, which seemed fitting as we had sampled their chardonnay earlier.

As we let the wine breathe we took in the entrees as they were set in front of us.  The Jumbo Sea Scallops presented a delightful array of four panko-coated scallops arranged around a nest of crunchy chives and tomato coulis. Atop each scallop sat a generous dollop of sundried tomato tapenade, while underneath hid a thin sliver of new potato, all drizzled with house made Green Goddess sauce and red pepper cream.  Chef Kelley uses only dry day boat scallops, which are sold the day they are caught and are not preserved with any additives.  The difference is phenomenal, as these scallops are intensely flavored, deliciously sweet, and firm to the bite.  Each bite of the gently seared scallops provided an intense burst of almost buttery sweetness.

Then there was the steak—the signature dish on the menu. An eight ounce Prime Filet Mignon of Certified Angus Beef® commanded its plate, sitting tall in a shallow sea of port wine demi-glace.  Accompanying it were sliced fingerling potatoes, shitake mushroom ragout, and a generous cut of Roquefort cheese.  The sensation of biting into Prime Angus filet mignon deserves a moment’s contemplation: the meat, soft to the touch and barely requiring a knife to slice through its tender grain, feels like velvet and practically dissolves upon touching the tongue.  After a pause, savoring our first bites, we ecstatically tackled the rest of the dish, delighting in the firm give of the fingerling potatoes, the woodsy bite of the ragout, and the ideally-suited port wine demi-glace and creamy Roquefort.  The dish was absolutely sublime.

Feeling that we could not be more satisfied, we were surprised when our desserts proved us wrong.  Several of Georges on Fifth’s desserts are prepared in house, and their freshness is evident.  The Grand Marnier chocolate mousse, served in a wafer-thin candied almond bowl rooted to the plate with crème fraiche, was an explosion of decadence.  The Berries and Cream, also served in a candied almond bowl with airy crème fraiche, offered refreshingly light sweetness, an ideal conclusion to a decadent meal.  We also sampled the white chocolate raspberry cheesecake which, while not prepared in house, was admittedly addictive, with a tart creaminess and gentle texture.

Georges on Fifth was developed as a “local’s place”—and everything from the portraits on the walls and the building’s rich history to the inviting atmosphere suggests that locals will feel at home.  The staff is friendly, the sommelier approachable, and the owner one of the most gregarious hosts around.  Details such as a low-priced children’s menu and live entertainment clearly have the local in mind. However, the menu, with its exclusive selection of Prime meats and quality seafood, makes Georges no ordinary “local’s place.” Whether you are in San Diego for the weekend or have lived here for years; whether you are looking for a taste of history or a taste of Prime Certified Angus Beef ®, Georges on Fifth provides an elegant and epicurean dining experience for San Diegans and visitors alike. 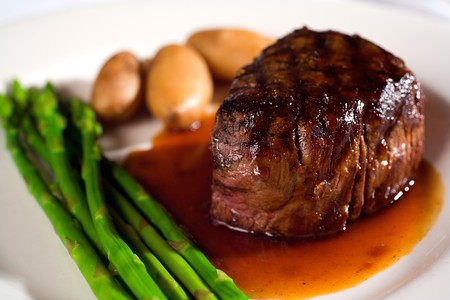 Does your building have any history?
Yes, During the 1880’s, Wyatt Earp ran a saloon and gambling hall here called “The Oyster Bar“, dealing “Faro“- a card game popular at the time - in what we now call The Wyatt Earp Room.
What type of beef do you serve?
Georges on Fifth serves the only hand selected, "center-cut" and Aged Prime Certified Angus Beef in San Diego.
Do you have a private room?
Yes.

Monday-Sunday: 5:00pm-10:00pm. This is a sample menu only. Prices and availability may be subject to change.

Our Finest Cut of Beef

Monday-Sunday: 5:00pm-10:00pm. Available to children ages 12 and under. This is a sample menu only. Prices and availability may be subject to change.