The Marine Room’s artistic cuisine is only matched by the natural beauty of the surrounding surf. Open for over 70 years, the La Jolla landmark offers world cuisine with an emphasis on seasonal ingredients and French techniques. Renowned for its fresh, local, and exotic seafood, savor the finest steak or indulge in their other creative fare. Enjoy Executive Chef Bernard Guillas’ pairing of delicate Maine Lobster tail and Lemon Verbena with sweet and spicy Mango-Habeñero Sausage finished with rich ginger liqueur butter. Experience elegant relaxation at the bar and lounge before or after your meal. Special bar offerings include select hors d’oeuvres, creative small plates, Marine Room Mixology specialty drinks, and classic favorites. 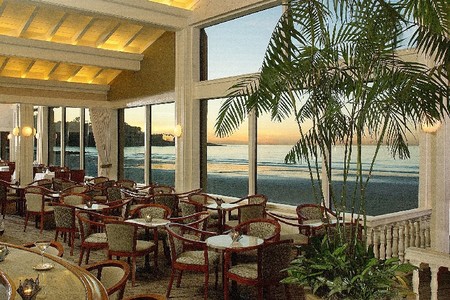 Do you have an ocean view?

Yes, the restaurant is located on ocean front property

When did your restaurant first open?

Outstanding! Worth every penny!

The view: Spectacular! The service (by David): Wonderful! The food: Among some of the best and most beautifully presented we've ever eaten! It's expensive, but *so* worth it!

Sunset seating by the ocean, exquisite service and fresh delicious seafood ... and a delightful wine list and you are set for a romantic evening out ... or a great place to take out-of-towners!

The restaurant had wonderful beautiful food and great service. Although the portions were small, the dessert and the ambiance was worth the money.

While I've been to the Marine Room on several occasions to enjoy both the food and the view, this is the first time I've been there for a special occasion. It's Thanksgiving 2004 and I didn't want to cook. We arrived a half an hour early to enjoy a drink in the bar and do some people watching (La Jolla is fantastic for people watching). Right at 7 p.m. we were seated in a window booth built for two that was ideally situated to still people watch, but to also enjoy the view of the flat, but rising tide. Our waiter arrived at our table instantly to see if we needed refills on our drinks from the bar. Our bread server arrived quietly and deposited bread and butter without us even noticing his arrival and departure. Appetizers were delicious and plates weren't removed until both of us were done eating (I adore good service). Our entrees arrived at a leisurely pace which allowed us to continue to enjoy the atmosphere and each other. Neither of us opted for the traditional Turkey and we were both pleased with our selections. We chose to forgo dessert and coffee as the meal had been so very good and filling. The only hitch in the evening was when someone else's pumpkin pie showed up on our bill. Our waiter quickly whisked it away and brought us a new and corrected bill. We're excited to go back at high tide and watch the waves break against the windows.

Great place to go. The prices are up there, but are well worth it for the food, service, and atmosphere.

The service, the view, and the food was outstanding. The ocean view was breath taking. I definitely will recommend to my guests at my hotel. Thank You!

The view is remarkable with the ocean waves just feet away from the windows but it is the outstanding food and service that make this restaurant a must when in San Diego. Great lunch also

We had a party of 4 right before New Years eve. The food was absolutely delicious and the view was perfect!

Pretty good but should be better...

I've been to this restaurant on several occasions. The atmosphere is nice with a great view. The food is WONDERFUL but as many reviewers have stated, they're prices are pretty high. The excellent food makes up for it but some of it is taken away from the service. It's been hit or miss depending on who you get. My first time was memorable with a fabulous waitress. We were treated very well with all our needs taken care of and more! But the last time I went, the waitress seemed more interested in the bigger parties for the bigger "payoff" if you know what I mean. Service that time was slow to come and it was for my wife's birthday. The meal ended with a request to have a simple candle in the dessert I ordered. Dessert came with no candle!! And then the waitress tried to make up for it by bringing a second dessert with the candle! Kinda anti-climatic and ruined the moment. The only positive, I guess, was that she didn't charge us for one of the desserts, although I remember earlier occasions, we usually were given complimentary desserts for special occasions. Just felt this waitress was fumbling and bumbling most of the time. At times the ambience can seem a bit "snobbish" with the crowd. You sometimes have to be comfortable with the conversations of rich folks that you happen to overhear. And yes.. you'll have to dress appropriately. Bottomline for the price you pay, the service should be great each time, every time.

The view is priceless... the food is good. We took family there that was in from out of town because we heard that there was no place like it in San Diego. There was 6 of us and with wine it cost about $100 per person. I don't mind spending that if the food is what is stated on the menu. Three of us ordered fish and the other three meat. The ribeye, filet mignon and veal all had the same sauce, which was good, but on the menu they claimed to all be different sauces; they were, without question, the same. All were ordered medium rare, all came out to the table as medium, borderline medium well. They were all still tender and the sauces complimented the dishes somewhat. I moved out to California a little over a year ago from New York. I thought this experience would have been comparable to high end cuisine in Manhattan, but we were all disappointed. To be such an acclaimed restaurant and not even be able to cook meat to the desired temperature, is unfathomable to me. The appetizers were very good, the fish very good and the wine was excellent. But for three out of six entrees to be overcooked and misleading on the sauce that is served with that is unacceptable. The chef should be a little more particular with the way the dishes are explained on the menu and use the sauces the way they are described on the menu to compliment the dishes. He should also not send out food that is not perfect if he wishes to be acclaimed for his food and talents. If they didn't have the view, it wouldn't even be worth $30 per person.

I took my sister and my girlfriend to have some drinks there. The taller blond bartender hit on both my girlfriend and my sister, repeatedly! He even followed my sister to the bathroom to try and give her his number. Bordering on sexual harassment in my opinion. We left and didn't even try the food.

I booked the Marine Room for a very important occasion and am sorely disappointed. The server was very slow to ask if anyone wanted drinks, the salad was very fishy and wilted and the main course was so so. At almost $100 for 2, this is horrid. I really feel like I want my money back,. The server noticed that most of the food was left on the plate and asked if everything was alright and when told it wasn't, just said "oh I'm so sorry" and brought the bill, for $97 !!

Six of us had dinner on Sat. August 7 to celebrate our friend's victory over cancer. It was the first visit to the Marine Room for all of us and we anticipated a highly enjoyable experience. It started downhill immediately when our waiter, Jim, took over 15 minutes to take our cocktail order, which was wrong. One drink was ordered virgin, but it had alcohol. Jim did not apologize, simply saying "Oh, I told them it was supposed to be virgin". The bread server had to be asked 3 times for another round of bread before we received it. We had to wave down Jim to get a second cocktail. Our food was served timely and the caesar salad and entrees were above average, but not superb as we were led to believe they would be. Jim was also visibly upset that we ordered 3 separate checks when we ordered..."Oh, you need 3 checks???" At an average of $80.00 per person we were left wanting service and food quality that deserved that level of expense. What we expected to be a great experience and celebration turned out to be a disappointment and sour remembrance of the vaunted Marine Room. And....to make it even worse, I submitted an email critique to the Marine Room website over 3 weeks ago and have never received back any form of reply. So much for their five star reputation for customer service!