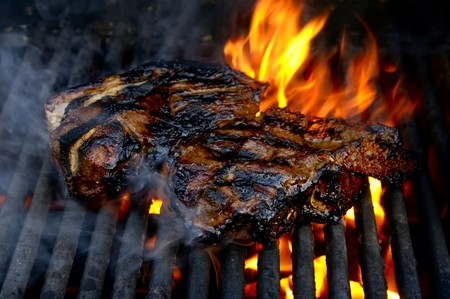 You sit down in a restaurant, scan the menu, and find something that catches your eye—perhaps it’s the chicken, or the ribs, or the fish of the day. But then, as you study the menu’s description, you aren’t so sure you know what will arrive on your plate. You know you like chicken, but what is sous-vide chicken? You’ve had ribs a thousand times, but what are braised short ribs? Which is healthier, the fish option that is pan-fried or the fish that is poached? Knowing a bit about simple cooking techniques can go a long way when it comes to making menu choices. Here are a few preparation techniques that you may find on the menu next time you dine.

Baked dishes are cooked through dry heat, in an oven or similar piece of equipment. Baking allows ingredients to mingle, cheeses to melt, and breads to come together. Baking both browns the surface of a dish, and retains moisture inside. Baked dishes are often hearty and comforting, such as lasagna, bread pudding, and French toast.

Braising involves searing a main ingredient over high heat, then adding a small amount of liquid and simmering over low heat for a long amount of time. Liquids can include chicken or vegetable stock, juice, beer, or wine. Braising is often used to cook tough cuts of meat, such as short ribs or brisket, as the technique renders the meat to a pull-apart tenderness. Vegetables can be braised along with the meat for a one-pot, stew-like meal. Braising produces tender, hearty dishes, ideal for winter days or cold climates. French Coq au Vin, Hungarian Goulash, and Italian Osso Buco all are made by braising.

Blanching is the process of quickly submerging ingredients in boiling water. It is common to blanch vegetables, as the process heightens the color and retains crispness. Blanched vegetables are often re-cooked by sautéing, stir-frying, or steaming before being served. Blanching is a healthy cooking technique as no oils or fats are used.

Broiling is the technique of cooking ingredients very close to an open flame. It is the indoor equivalent of grilling, often with the flame coming from the top, rather than a grill’s bottom. Expect broiled meats or vegetables to be blackened or charred on the outside and less done in the center. Casseroles such as macaroni and cheese can also be broiled during the last few minutes of cooking to create a bubbly, crusted surface. Broiling and grilling are often techniques used to prepare high-quality meats and tender cuts such as steaks and chops. The words blackened or crispy often indicate broiling.

Brining is not a cooking technique but a method of seasoning and tenderizing meat before it is cooked. Brining involves soaking uncooked meat in a salt- and sugar-water solution for several hours and is usually employed before using a dry-heat cooking method, such as roasting or grilling. The process can increase the moistness and tenderness of meats, and help keep them from drying out during cooking, especially lean meats such as poultry and pork. If a menu item advertises brining, expect a moist, flavorful preparation.

Caramelization is the process of breaking down sugars by heating meat or vegetables over low heat, which results in a softened, browned, and distinctly sweet state. Caramelized onions are perhaps the most common use of caramelizing, often served as a topping or side dish to grilled meats or burgers.

Confit is a method of preserving meats by salting them and cooking them in their own fat, then letting the fat cool and storing the meat in it. The fat is discarded prior to serving, but the resulting meat is usually rich and moist. Duck confit is a common main dish, and confit of lemon or garlic are popular accompaniments to dishes. Confit can be a rich and decadent treat.

Curing is a term most often used to indicate meats that have been preserved through salting. Appetizer staples such as bresaola or prosciutto are cured, as are common pork products such as bacon and ham, fish such as lox and anchovies, and sausages such as salami, pepperoni, and chorizo. Curing can also refer to smoked meats, which are often both salted and smoked, fermented products such as sauerkraut, and pickled vegetables.

En Papillote, or “In Parchment”

En Papillote is a French word that refers to the technique of cooking ingredients in a pouch—often parchment or foil. The packets are placed in an oven, but rather than being roasted through dry heat, the contents of the pouch are steamed when the liquid—oils or juices—in the packet heats up. It is a particularly flavorful preparation method, that gently infuses the main ingredient with flavors of herbs, spices, or other ingredients placed in the pouch.

If you see the word flambé on the menu, expect a dramatic presentation. Flambéing is the process of adding high-alcohol liquor such as cognac to a nearly cooked sauté pan, then igniting the alcohol, causing the pan to erupt into flames. The flame can be tempered with fresh lemon or orange juice, or left to burn out on its own. Flambé dishes are often presented in restaurants with open kitchens or by a waiter, who performs the technique tableside. Bananas Foster and Crepes Suzette are two flambéed desserts.

Frying is the process of cooking ingredients in hot oil, which infuses the ingredient with a rich flavor as well as a considerable amount of fat. Pan frying involves cooking the ingredient in a shallow layer of oil in a skillet, while deep-frying completely submerges the ingredient in oil. Fried and pan-fried preparations can often involve coating the main ingredient in a batter or breadcrumb-and-egg coating before frying, which results in a rich, crisp coating that absorbs the cooking oil. If a healthy meal is what you are looking for, you may want to avoid menu items that advertise they are fried. The following words often indicate frying: beer-battered, tempura, crispy, panko-coated, fritto misto.

Marinating is not a cooking technique but a method of preparing meat or vegetables prior to cooking. Meats or vegetables are submerged in a liquid concoction, in order to impart moistness and flavor to the ingredient prior to cooking. Marinades can be made from juices, stocks, wine, beer, condiments, chopped or pureed fruits, vegetables, herbs, and/or spices. Marinades are often used when a dry heat such as grilling or roasting is to be used.

Poaching is the process of simmering ingredients in water that is just below the boiling point. The poaching liquid can be water, stock or broth, or even milk. Poaching is a relatively healthy way of cooking fish, eggs, and vegetables like asparagus, and results in a gentle surface texture and a moist consistency.

Roasted vegetables or meats are those that have been cooked in a closed oven for an extended period of time. Roasting is a popular technique with large cuts of meat, racks of ribs, and game birds, as well as with many vegetables. The outside of the meat or vegetable tends to become dry and crispy, while if prepared correctly, the interior remains moist. Roasted meats can be basted throughout the cooking process, which continually drizzles liquid over the top of the roast, helping the meat retain moisture.

Rotisserie meats are meats roasted in a specially designed oven, which typically features rotating spits on which the meat is placed. The rotation of the spit ensures even cooking, and also helps the meat retain its juices, which can drip off in a regular grill or oven. Rotisserie cooking is often used for cooking whole chickens, barbecued ribs or brisket, and Middle Eastern schwarma and doner kebab.

Sautéed dishes are prepared in a skillet over high heat, often using a small amount of oil, butter, or other fat. Sautéing is a common method of cooking vegetables, and is healthier than pan frying as it uses less fat.

Searing is a technique that imparts flavor and texture to a meat by browning the surface of meat over very high heat. The browning of the surface turns the outer layer crisp and imparts a sweet, caramelized flavor that contrasts with a tender center. Searing is often combined with other cooking methods, including roasting, braising, broiling, and grilling, although meats that can be served rare, such as sushi-grade tuna, are often simply seared and served with the center raw. Searing can also occur as the very last step of the cooking process, ensuring a particularly crispy exterior.

Smoking is a dry-heat cooking process in which meats or vegetables are cooked by the smoke of burning wood. The equipment used for smoking is similar to an oven or grill, although a wood fire is the main source of heat rather than a gas or electric heat source. The distinct flavor imparted on smoked meats can vary with the type of wood used—hickory, mesquite, and maple smoked meats will all have dramatically different flavor. Pork and beef ribs are commonly smoked, as are fish such as salmon and trout. Smoking is also used in the making preserved goods such as smoked Gouda or cheddar, ham and bacon, beef jerky, and lox. Mesquite grilling is a technique that combines the flavor of smoking with a traditional grill.

A relatively recent cooking technique, sous vide involves sealing ingredients in plastic and slow cooking them over an extended period of time—often up to 24 hours—by submerging them in a carefully-maintained water bath. The key to the technique is the vacuum-sealed pouches, which keep both juices and nutrients from escaping during the cooking process. The precise low-temperature and extended cooking time result in tender textures, uniform doneness, and unrivaled flavor. Sous-vide dishes can be served straight from the pouch or can be quickly grilled or seared for additional texture. Words that indicate sous-vide include Cryovacked and vacuum-cooked.

Steamed fish, potatoes, or other vegetables are cooked over a small amount of water or other liquid in a sealed container, so that the heat from the liquid’s steam cooks the ingredients. Steaming is a relatively healthy method of cooking vegetables, in that little or no fats or oils are used. Shellfish such as mussels and clams are often steamed in a butter and white wine broth, as the steam forces open the shells and cooks the meat within.

Stir frying is often used in Asian cuisines, as a way of cooking bite-sized pieces of meats and vegetables in one pan. Ingredients are added one by one depending on cooking time until a medley of different ingredients is mixed together. A sauce is usually added to a stir fry at the middle or end of the cooking process. Seeing stir fry on a menu can indicate a vivid, colorful dish with a variety of ingredients. Words that can indicate stir fry include wok, wok-fried, and fried rice, which is essentially rice stir-fried with an egg and other ingredients.