Numbers and Figures in Molecular Cuisine 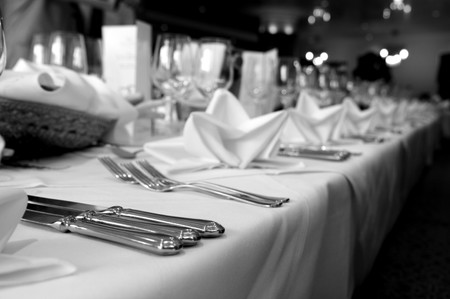 Molecular gastronomy has been making waves with recent appearances in a $635 cook book that incorporates encyclopedic knowledge of food and science jam-packed into a 6-volume set, fine dining restaurants popping up around the nation catering to this progressive cuisine, and a reality show that premiered in late March on the SyFy Channel that is geared towards furthering this movement.

When Top Chef-contestant Marcel Vigneron first brought molecular gastronomy to primetime television, it was received with more agitation than gusto.  His deal was to dip things in liquid nitrogen and piss off the other contestants along the way, but Vigneron’s reality show “Marcel’s Quantum Kitchen,” which premiered on the SyFy network in March, is slowly winning over the crowd one catering experiment at a time.  And this is  how molecular gastronomy has emerged onto the scene—through its innovative thinking and developments that are so much more about experiencing life and food than just about going the obvious or conventional route.

In 1992, the term “Molecular Gastronomy” was first coined by Hungarian physicist Nicholas Kurti and French physical chemist Herve This.  According to This, molecular gastronomy is a culinary trend that requires the practitioner to understand and appreciate the chemistry and physics behind the preparation of any dish.  From the reason why mayonnaise becomes firm to why a soufflé swells, molecular cuisine examines these inquires and much more.

This says in his article on EMBO Reports that “cooking was the last of the ‘chemical arts’ to become the object of scientific scrutiny,” since rather than relying on solid science to understand food, cooking still relies on “telltale and anecdotal knowledge.”   Old wives’ tales like the explanation on how one’s menstruation cycle affects mayonnaise preparation is one of the reasons why molecular gastronomy was created.  Molecular gastronomy was also This’ and Kurti’s reaction to the unscientific way people approached food preparation.

The six-volume, 2,438-page book titled Modernist Cuisine, which was released earlier in March 2011, is a lavishly illustrated cook book bound to test the limits between food and science.  Like molecular gastronomy, Modernist Cuisine started out with a problem.   Nathan Myhrvold, former CTO (Chief Technology Officer) of Microsoft, decided he would co-author the nearly 50 pound cookbook when he could find no literature that explained how to cook various foods using the sous vide technique -- a cooking procedure that incorporates cooking vacuum-sealed food in plastic bags for a long period of time at a consistent and low temperature.

Sous Vide has been around since the advent of food-grade seals and vacuum sealing.  In 1974, Pierre Troisgros, a three-star chef from Roanne, France, wanted to find a way to cook foie gras without shedding 30 to 50% of its original weight while cooking.  He enlisted Chef George Pralus to help him find a new cooking technique for foie gras.  Pralus came up with the idea of wrapping layers of plastic around the foie gras, and after implementing a number of experiments, they had an outcome.

Chef Pralus is now known as the founder behind sous vide.  He eventually started his own school called Culinary Innovation, where he taught the technique to thousands of chefs over the years. Although Pralus is the self-proclaimed “Pope of Sous Vide,” the man behind the movement who calls himself the “Sous-Pope” happens to have no training as a chef.  Bruno Goussault, who is both an economist and a scientist, was proactive in helping chefs implement in the most cutting-edge techniques of sous vide.

In 2005, Chef Grant Achatz opened Alinea in Chicago, a restaurant that has garnered world-wide praise and accolades for not only its innovative fare but also for the complex layering and labor intensive designs incorporated into each of its dishes.  Achatz’s recently published a memoir titled, Life on the Line: A Chef's Story of Chasing Greatness, Facing Death, and Redefining the Way We Eat, which describes an artist who is consumed by his vision to the point that his personal life plays second fiddle to his art.

A fine-dining establishment that serves Progressive-American cuisine, Alinea is known for its labor-intensive and extremely creative and innovative fare.  Accompanying his famous dishes, Chef Achatz has collaborated with designer and sculptor Martin Kastner to create a range of unique service-ware for Alinea that includes beautiful pieces made from glass, metal, and crockery with names such as “antennae,” the “anti-plate,” and “2D-3D.”  Chef Achatz, who has a deep respect and understanding for ingredients and flavors, creates his dishes with the intent of going beyond the normal conventions of food and dining, giving his all to convey to diners an experience that will delight the mind and the senses.

Dishes at Alinea represent the concepts behind each menu item.  Crafted to resemble the design behind each dish, ingredients are used like general art materials to further the idea of a dish.  An example of a past Alinea menu item is the Lobster, Parfait, Salad, Soup that consists of three layers.  The top section is a chilled consommé, accented with Indian spices.  Underneath is a layer of pistachio ice cream and a pudding made from reduced lobster stock.   A crumb mixture made out of lobster cracker, poppy seeds, and butter powder gives that crunchy element to the menu item. Other dishes like the Pork Belly, Curry, Cucumber, Lime involves hands-on interaction.  Guests are invited to assemble the bowl in which the dish is served in.  Made with chocolate, menthol, coconut, and hyssop dessert, Achatz himself or one of the chefs will plate the dish at diner’s tables.

Shortly after Achatz won acclaim as one of the nation’s top chefs, he was diagnosed with tongue cancer.  This devastating news did not deter Achatz’s artistic mindset.  He continued to work at Alinea asking his sous-chefs to sample the dishes after he was done preparing them.  According to Achatz, taste is more than something that happens to the tongue, it is also “about emotion, translating a feeling, a memory, and an experience.

Like how Chef Achatz first worded it: molecular cuisine is something you live and breathe and feel in the marrows of your bones.  It is a soul-searching discipline that involves you to take another look at food, cuisine, and eating.  And besides that, take an avid interest in what you put in your mouth instead of bypassing the intricate science that goes into the rendering of every meal.  Knowing that there is so much more to food and cooking—practically an everyday and even mundane activity to some—than what meets the eye, should give people a different perspective on the complex nature of the world and certainly give a brand-new scope to what is sometimes deemed as the “ordinary."