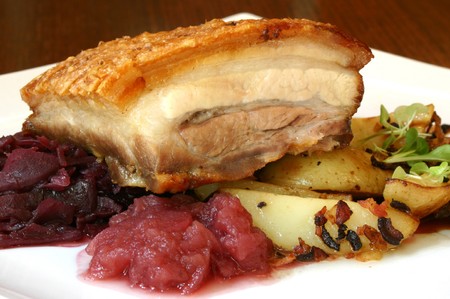 It’s not like it sprouted out of nowhere, was a recent discovery of a Nobel scientist or fell from the sky like Superman. It’s pork, specifically pork belly. This recent fad of utilizing pork belly in all sorts of shapes and forms has been sprouting up all over menus, making its way into our mouths. You see it in appetizers, entrees, salads and garnishes and are nevertheless amazing, much like The Man of Steel.

Pork Belly is a boneless cut of fatty, flavorful meat from just where it says: the belly. It’s widely used in Asian cuisine, and Americans usually make bacon from it. It’s about 90-percent fat and 10-percent protein, but 100-percent flavor. Pork belly can be cubed and diced into small pieces and sautéed in a pan, cut into inch-thin strips and seared on each side on a flat-top grill or braised in some sort of flavorful liquid (vegetable stock, pork stock, wine, salt and sugar, vinegar) for hours until the desired texture, and taste, is reached.

In Italy, “Pancetta” is pork belly normally salt cured with spices like nutmeg, peppercorns, hot pepper, fennel and garlic. It’s then dried for over three months and usually rolled over itself creating an even distribution of fat and meat. In Korea, it’s called “Samgyeopsal” and it’s a familiar dinner dish (uncured as well) that comes with garlic, lettuce leaves, kimchi (spicy cabbage) and rolled up and eaten like a taco or burrito. The Japanese thoroughly enjoy pork belly, “Buta no kakuni”, with vegetables and rice and the Chinese (who consume 50-percent of the world’s pigs) devour “Siu youk” by the ton on a daily basis.

Having made it before, it’s not entirely difficult to do or to get. You can go to your local butcher shop and it can cut pieces to suit your liking. Right now you can get pork belly at the butcher for anywhere between $3 to $4 per pound and the price varies depending on how popular it is at the time and in the area. There are recipes that will work with what you have in your kitchen as well. A crock pot is a good set-it-and-forget-it solution if you’d like to prepare it in the morning and allow it to cook all day on the low to medium setting. Braising it in a stock pot on the stove with a sweet and salty liquid is also a viable way to get your pork belly super tender and full of flavor. Braising it in the oven in a tin foil covered hotel pan or putting it in a pressure cooker to really speed up the time and push flavor into the meat would are great options for you if you’ve got them. I recommend cooking it in a hotel pan in your oven for a few hours, then taking the foil off and allowing the skin to get brown and crisp up.

This isn’t an adventurous cut of meat that has magically found its way to our tables, it has been right there in the form of bacon or pancetta all this time, and it’s just been popularized because it’s full of flavor and there are so many options you can do with it. We as Americans have just been eating it in a different form we’re not necessarily use to. So maybe it’s like Clark Kent and has been in hiding. And while it’s not going to save our lives faster than a speeding bullet, it has superhuman flavor and infinite culinary possibilities.