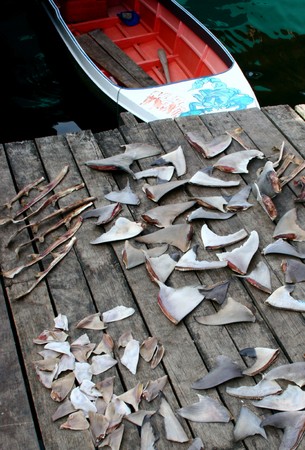 For many people, shark fin soup probably has a mysterious aura.  In certain circles, it is appreciated as an epicurean delight, a rare treat to be savored.  But it also pops up in the news from time to time as the subject of an international controversy for ecologists, animal rights activists and fisherman around the globe.  So is shark fin soup an exotic delicacy with supernatural healing powers or an unethical and exorbitant indulgence?  What is the dish on this dish?

Shark fin soup has been highly valued in Chinese culture for hundreds of years.  It was once considered a rare delicacy that was eaten by only the wealthiest people on the most special occasions - a status symbol even swankier than caviar or foie gras.  But because China has enjoyed exploding economic growth in the past couple decades, there has been such a radical upswing in the consumption of this delicacy that it has become a staple, albeit an expensive one, of Chinese cuisine.

To prepare the dish, the fins are boiled until the cartilage that they are made up of breaks apart into long stringy strands that resemble noodles.  The substance of the fins actually has very little taste itself.  Rather, it soaks up the flavor of whatever it is cooked with, much like tofu.  It is usually cooked with chicken, ham or mushroom broth and it is those strong flavors that distinguish the soup.

So how has this relatively simple dish gained such an illustrious reputation?  Well, part of the appeal of shark fin soup is that traditional Chinese medicinal lore claims that it possesses a wide range of almost magical healing and nutritional properties.  According to some, it is even alleged to hamper the growth of cancerous tumors.  It is also said to increase circulation, improve lung, kidney and digestive function and provide vital energy.  In addition, when the dish first became popular, fishing technologies were much less advanced and catching sharks was much more challenging and dangerous.  Therefore, the soup was special in its rarity and a sign that the person eating it was either very rich or very powerful.

Modern nutritionists generally question the ancient claims of the healing powers of the soup.  The fin is largely made up of cartilage, so it is does have value as a protein, but boasts little other nutritional value aside from that.   Also, most shark fin that is sold and turned into soup has been dried and bleached to make it more conducive to transport and storage, and that can strip out much of the nutrients it may have had.  Furthermore, some fins have been found to have high levels of mercury, which is known to have numerous negative health consequences.

But the quandary of whether or not Shark Fin Soup has any mystical powers is not the reason it is the focus of a worldwide ecological controversy.   Rather, it is the future of the ferocious animal from which it is derived that is in question.  Opportunistic fisherman wanting to cash in on the lucrative business are far from scarce, and with the great increase in demand, some ecologists fear that the animals are being overfished.  Estimates of the number of sharks that are killed each year solely for their fins range from between 38 and 100 million.

The U.S. Fish and Wildlife Service’s Threatened & Endangered Species System doesn’t currently list any sharks as protected, but they are considered by many wildlife experts to be highly vulnerable.  Unlike fish that might lay hundreds of eggs in a single go, female sharks can only have single births once or twice a year, making it much harder for them to recuperate their population once it becomes depleted.  Also, as the apex predator in the oceanic food chain, sharks play an important role in keeping the marine ecosystem in check.  If they were to become extinct, the domino effect could cause wild shifts in other aquatic species’ populations and have negative consequences throughout the whole ocean environment.

In addition to the environmental consequences of aggressively hunting sharks, there is an ethical issue. Many sharks are killed by “live finning,” a brutal practice in which sharks are caught – either purposely or as accidental bycatch in swordfish, tuna or other fish nets – and brought into the boat, where the valuable fins are cut off.  The body of the shark, often still alive, is then thrown back into the water.  The handicapped and defenseless shark is unable to swim and either suffocates to death or is eaten by other predators.   The meat of the shark is worth very little as compared to the fins, so it is more profitable for the fishermen to discard the body in order to leave room in the boat for the more worthwhile cargo.

In its defense, the fishing industry generally points to the fact that most data available about the shark trade and the prevalence of finning are inaccurate, or at least incomplete, because it is difficult to ascertain the scope of certain fishing practices across the vast oceans, where much of it goes entirely undocumented.  Also, most studies do not discriminate data among different species of shark, so it is impossible to establish the effect on those that are most at risk of becoming endangered.  Only 3 species of sharks - basking, whale, and great white - are considered vulnerable to endangerment any time soon.  The other 397 species that are used in shark fin soup are commonly caught by fisherman around the world, and could arguably be considered too abundant to be worried about in that respect.

As for the live finning, some people point out that it is done mostly by tuna fisherman when a shark is caught in their net accidentally and that most sharks are not intentionally caught to be maimed.  It is also argued that the perception that all shark fins are harvested using live finning practices is largely exaggerated by preservation activists (especially in the U.S. and Canada), and that the overall percentage of fins procured in this way is likewise embellished.  Rather, just as in any industry that farms or catches animals, there are a handful of immoral fisherman that give the rest a bad name.  Therefore, eating shark fin soup does not necessarily equal the support of this practice.

Even shark-activists agree that shark fishing should not be banned altogether or too stringently regulated since the meat is an important source of protein in the local cuisine in some parts of West Africa and India.  And for the Chinese, banning shark fins altogether could be seen as inhibiting an expression of their culture.

Public knowledge of the discussion surrounding shark finning has been growing in recent years due to outreach from groups like WildAid and the Animal Welfare Institute.  While it still remains a huge part of the food culture in China, it is slowly losing its allure around the rest of the world as word of the controversy spreads.  In 2007, Disney World Hong Kong removed shark fin soup from their wedding menu.  NBA star and major Chinese celebrity Yao Ming publicly announced that he would no longer eat the delicacy.  Other famous faces that have rallied to the aid of sharks and lent their celebrity to the cause are filmmaker Ang Lee and Taiwanese President Chen.  To date, 18 countries have banned finning altogether, with many others imposing restrictions that aim to limit the practice.

In the U.S., the controversy has spread all the way to Washington.  Representative Madeleine Bordallo, a delegate from Guam, has spearheaded  a new initiative called the Shark Conservation Act of 2009, to further protect sharks under U.S. law.  Between programs like this and the increase in awareness, shark fin soup may be on its way out.  Worldwide, shark trade on a whole has decreased significantly from 2003 to 2009 (from 897,000 to 758,000 metric tons), with fins making up a decreasing percentage of the total.  This may be a result of increased public awareness, or possibly just another casualty of the global recession.

However embroiled in controversy this dish may be, serving or eating shark fin soup is still completely legal.  So for those of you whose curiosity has been piqued, there are places that will happily serve it.  It can be found at many high-end Chinese restaurants around the U.S. for as low as $15 a cup.  Additionally, a new trend of using fin substitutes, made from either vegetable extracts or pork gelatin that closely resemble the authentic product in taste and texture, has begun to spread, so the dish does not have to come with the ethical baggage and can be relished by shark lovers as well.