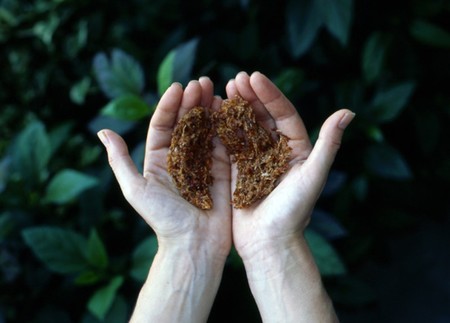 What do you get when you combine centuries’ worth of history and lore with violence, politics, and exoticism? One of the most expensive dishes served anywhere around the world embodies all of these elements: Bird’s Nest Soup is a dish of royalty that has a reputation that far exceeds its subtle flavor. In order to understand how this prized specialty has achieved the controversial status it now enjoys, we must explore its rich place in history. Once exclusively consumed in China by monarchs looking for eternal life, the harvesting and consumption of these bird’s nests now largely depends on an industry notorious for its hazardous working conditions and poor conservation efforts. Is Bird’s Nest Soup really the nectar of the Gods, or a hollow justification for corruption and exploitation?

The bird’s nests in question are constructed by species of swift birds that live throughout regions of southern Asia. Known as “walet” in Indonesian and Malay languages, these cave swifts have traditionally built their nests on the high walls of massive limestone caves in places like Niah, Gomantong, and Borneo. The male walet work tirelessly during a thirty-five-day period of the breeding season to build their nests entirely from saliva. The glue-like saliva is woven like fiberglass by the birds into small cup-like nests, which dry to be thin and translucent. Harvesters separate the nests into three categories of quality: White nests, also referred to as “white gold,” are the most pure of the three because they lack contaminants like feathers and twigs. These white nests are the first of the season to be picked – once the cave walls are stripped of the white nests, pickers wait for the birds to build new ones so that those too can be harvested. “Yellow” and “black” nests may be the birds’ second or even third attempt, and signify an impure product. It is also suggested that white nests have higher nutritional and medicinal value than the other two varieties.

Is swiftlet saliva really the key to eternal life?

The supposed health benefits of this white gold have been the key to its demand for centuries. It is difficult to separate fact from fiction when investigating the nutritional and medicinal values of these saliva-based nests. Traditional Chinese Medicine links their consumption with respiratory health, improved skin complexion, increased libido, and general longevity. While research has yet to validate many of these medicinal claims, the nests are rich with glycoprotein that may promote cell division in the immune system.

The history behind this savory scandal

Ironically enough, the very healing properties the nests supposedly contain are linked to their earliest introduction into ancient Chinese aristocracy, and their first association to bloodshed and corruption. According to Yun-Cheung Kong, a professor of biochemistry at the Chinese University of Hong Kong, swiftlet nests were first traded in China during the T’ang Dynasty (618-907 A.D.). Sometime between the years 1368 and 1644, Admiral Cheng He introduced foreign nests to the imperial court of the Ming Dynasty. It is believed that at this point in time domestic supplies of the nests had been largely depleted, and imported varieties were in high demand.

While factual historical documentation is scarce, in her story “The Emperor and the Cook: The Story of Bird’s Nest Soup,” A. M. Zukarnaen describes the popular history of the Chinese emperor’s first encounter with Bird’s Nest Soup. The tale reads like an adaptation of Hans Christian Anderson’s “The Emperor’s New Clothes.” Zukarnaen explains how the royal cook was having an increasingly difficult time satisfying the emperor’s taste for exotic soups. Fearing expulsion, and beheading, the cook turned to a strange new import from Borneo: the bird’s nest. The cook did his best to prepare this foreign ingredient and served it to the emperor. After tasting the mild broth, the emperor angrily pronounced, “This tastes like ordinary soup... I can get this anywhere in the kingdom.” The cook grew desperate, and explained to the emperor that this soup was prized in Borneo for its life-extending properties. The emperor, finally taking the bait, exclaimed, “Ahhh, an exotic dish. Why didn’t you say so? This dish is fit for an emperor.” From that point on, in order to keep his secret about the soup’s strange key ingredient, the cook had all handlers of the nests killed – this became a bloody endeavor as new crews were constantly needed to retrieve the nests.

Casualties of the trade

Today, some might say a real trail of blood follows the harvesting and trade of the walet nests. Sarah Rooney, of the SF Gate, spent time investigating the more dangerous side of the bird’s nest picking industry in Thailand. Many of the islands and caves that house the nests are protected under the government’s environmental conservation plans. Companies in the business of picking bird’s nests must pay high concession fees to the government to gain access to the caves. And as Rooney points out, these expensive concessions have led some companies to protect their investments at all cost. She writes, “About a half-dozen companies… are protecting their fiefdoms with private armies that shoot at ‘unauthorized’ visitors.” She adds, “They also bribe authorities to look the other way, charge tourist operators protection money and keep locals suspected of being poachers from their traditional fishing grounds on the coast of the scenic Andaman Sea.” The Thai government, like other governments in the region, profits greatly from the concessions, which cost companies around one-hundred-million Thai Baht every five years, and has a reputation of condoning illegal activity on the part of the pickers.

The potential for violence surrounding the caves has become such a concern that the popular Thai adventure tour company, AndamanAdventures.com, voiced a warning to all visiting rock-climbing enthusiasts not to venture out to the caves. Simon Ramsden is the regional manager of Andaman Adventures, and wrote of the situation: “Rock-climbers who wish to climb off the beaten track are advised to learn a little about the birds’ nest collectors who control large numbers of perfect climbing islands in Phang Nga bay and off the southwestern Thai coastline.” He compounds his point by adding, “Climbers who climb such crags without permission will find themselves in very, very deep trouble. Please be advised not to under any circumstances do it.” It seems some of the private security guards have adopted a “shoot now – ask later” policy.

And while the fear of gun-fire should keep outsiders away, the nest pickers themselves face the daily prospect of injury, or even death. The process of nest picking hasn’t changed much over the years, and many workers still rely primarily on rudimentary tools and non-existent safety measures to harvest the white gold. Entering the caves can be in itself a perilous task – pickers must shimmy barefoot up sheer rock faces, sometimes only secured by a rope tied around their abdomen. Once in the caves, they climb high on bamboo rods and scaffolding to reach the nests. A three-pronged tool called a rada is used to loosen nests from the cave walls, because to use one’s hands is said to anger the gods. It is a common occurrence for the bamboo supports to break; each season, one in every sixty harvesters dies of work-related injuries.

Human casualties of the trade may gain the most publicity, but the larger walet population may be taking the hardest hit of all. As mentioned before, pickers sometimes harvest up to three nests from each bird in a season. The rationale is that the third and final nest built by the walet is left untouched by the workers so that the birds can lay their eggs. Unfortunately though, when pickers find themselves facing increasingly high demands – even for the diminished quality of “black” nests – they resort to harvesting the birds’ last nests. It is difficult to say exactly how many walet eggs and hatchlings have been lost to pickers discarding them from their nests before they had the opportunity to grow, but we can guess the number is staggering. Rooney notes, “A local source familiar with the bird's nest industry said there are only one-third as many nests as there were a decade ago, and the swiftlets have abandoned many caves.” If the bird’s nest picking industry continues down the path of over-harvesting the nests, it may soon wipe itself out with the extinction of the entire walet population.

It may be difficult for some to reconcile the over-indulgent demand for Bird’s Nest Soup with the harsh realities behind the industry that supplies it. The walet nest’s status in Traditional Chinese Medicine as a powerful healing tool is a great selling point to an entire market of consumers, but some may be drawn to the delicacy simply because of the darker circumstances behind its harvesting. Ultimately, a single bowl of this mild and oddly textured soup can cost up to $100 in the US, and the price continues to rise as a wealthier class of consumer gains power in China and abroad. Fortunately, some in the industry are beginning to take notice of the very real prospect of depleted natural supplies, and the stigma of maintaining a corrupt industry. The future of Bird’s Nest Soup may depend on developing technologies like urban nest-farming, and other techniques that secure the wellbeing of both the birds and nest-pickers. Only time will tell if this white gold is worth its weight in controversy.