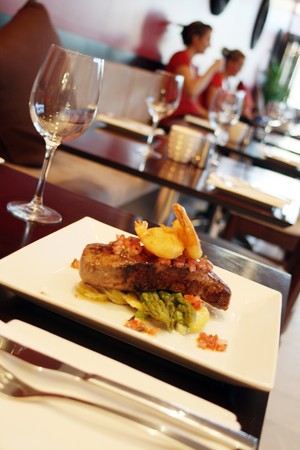 Las Vegas is a city in which even the most discriminating foodies are sure to find something to please their palates, due to the wide variety of cuisine genres, atmospheres and varying levels of esteem held by people all over the world. However, it's also a city of flashing bright lights, which may bring out the inner celebrity scout in anyone walking down the strip! If you are looking for a professionally prepared meal along with great ambiance, and perhaps a celebrity chef's name attached to it, here is a guide to a few of the most famous chefs in America and their restaurants in Sin City.

Known to many as chef to the Hollywood stars,  Austrian born chef Wolfgang Puck has not only earned multiple accolades including the James Beard Foundation Award and two coveted Michelin Stars, but is also the only chef to win the Outstanding Chef of the Year Award twice. Grabbing the attention of the rich and famous in the 1970’s with his culinary creations at the West Hollywood hot spot Ma Maison, he then went on to open his first restaurant, Spago in West Hollywood in 1982, later relocating to Beverly Hills in 1997. It was here at Spago that Chef Puck introduced the world to a new innovative style of cooking. His creations like his hand-crafted gourmet pizza; a crispy, thin crust topped with such ingredients as salmon, caviar and goat cheese.  This creation put Chef Puck on the map and the world of pizza has never been the same. In 1992 a second Spago opened in the Forum Shops at Caesars Palace hotel in Las Vegas. With much success, Spago and Chef Wolfgang Puck pioneered what would become the newest trend in Las Vegas. Since then every luxury hotel opening up in Las Vegas boasted to have at least one celebrity chef’s restaurant, changing the dining scene in Sin City forever. Spago’s menu focuses on seasonal American cuisine and menu items include entrees such as Roasted Half Free Range Chicken served with Yukon gold potatoes, goat cheese and wild mushrooms and natural jus, and Blue Cheese Crusted Filet Mignon with potato lyonnaise, confit bacon, cipollini onions, spinach and a balsamic reduction. Since opening Spago, Chef Puck has also opened several restaurants in Las Vegas, including Chinois at Caesars Palace, featuring upscale Americanized Chinese dishes, Trattoria del Lupo at the Mandalay Bay featuring traditional cuisines of northern and southern Italy, and Wolfgang Puck Bar and Grill at MGM Grand, a more casual establishment offering huge salads and appetizers.

If the name Emeril Lagasse doesn’t ring a bell with you, maybe the phrases “Bam!” and “Kick it up a notch!” will. Chef Lagasse is widely known for his jovial personality while creating and demonstrating his mostly Cajun and Creole influenced cuisine on Food Network’s Emeril Live. Here he uses his now famous catchphrases, along with sometimes outrageous cooking moments, and a live band to entertain a live audience while showing the world how fun cooking can be. He also hosts The Essence of Emeril, also on Food Network. Emeril initially gained fame in the culinary world for his role as executive chef of Commander’s Palace at his home base in New Orleans, Louisiana before opening his first restaurant Emeril’s, also in New Orleans in 1990. Emeril’s won Restaurant of the Year that same year in Esquire magazine. Currently Chef Lagasse is Executive Chef and owner of ten restaurants across the U.S., including Delmonico at the Venetian hotel in Las Vegas, an upscale steakhouse with a southern twist. Menu items include entrees such as “Tournedos Au Poivre,” Grilled Petite Beef Medallions with roasted shallots and haricot vert, parmesan crusted baked tomato and brandy peppercorn sauce, and Twin Falls Natural Pork Tenderloin served with Steens Cane Syrup braised bacon with cooked greens and Creole mustard reduction. You can also find his restaurant Emeril’s New Orleans Fish House at the MGM Grand in Las Vegas featuring his signature style of “New New Orleans” cooking using fresh seafood and produce to create dishes such as Gumbo of the Day, Creole Mustard Glazed Texas Redfish, and Fried Oysters with Old fashioned Remoulade and Apple Smoked Bacon.

Although Chef Todd English may not currently be the most watched face on television, he is no stranger to being in the limelight. Aside from winning many prestigious awards including The James Beard Foundation’s National Rising Star Chef in 1991, later naming him Best Chef in the Northeast in 1994, and recently being named in the Who’s Who in Food and Beverage in America,  he has also been named one of People Magazine’s 50 Most Beautiful People. Chef English has also appeared in numerous television programs including his own public television program, Cooking in with Todd English, as well as Martha Stewart Living, Iron Chef America, The Today Show, Great Chefs of the Northeast amongst many others throughout his career. He made another television appearance as the Executive Celebrity Chef for MTV’s Video Music Awards in Miami in 2005. His flagship restaurant, Olives opened in Charlestown, Massachusetts in 1989 with rave reviews and was named Best New Restaurant by Boston Magazine. It has since then won many awards and is still named Boston’s #1 Favorite Restaurant by Zagat. Here at Olives, English showcases his signature style of rustic Mediterranean cuisine. Since then, he has opened many award winning restaurants across the U.S. showcasing a wide range of cooking styles. Olives restaurant has since become a national chain which includes a location in Las Vegas at the luxurious Bellagio Hotel. Diners will find themselves indulging in Flatbreads fresh from the oven, pastas, and entrees such as Slow & Low Braised Beef Short Ribs with creamy pumpkin puree, walnut ketchup, dried cranberries and green beans, and Seared Jumbo Sea Scallops A L’Orange with chestnut risotto, orange agrodolce, brussel sprout and fried collard green salad. He also headed up and partnered with actress Eva Longoria to create a Latin influenced steakhouse, Beso, which first opened in Los Angeles, recently followed by a second location at Crystals at the City Center in Las Vegas.

Chef Bobby Flay has certainly made a name for himself. Not only from the success of his Award winning restaurants and cookbooks, but also from boasting  multiple cooking shows on the Food Network, including Boy Meets Grill, Grill it with Bobby Flay, and Throwdown with Bobby Flay. Chef Flay is also widely known for his distinctively bold American/Southwestern cooking style. After attending The French Culinary Institute and then later earning the Outstanding Graduate Award in 1993, Chef Flay worked for numerous restaurants in New York City until he opened his first restaurant, Mesa Grill, in 1991. Mesa Grill received the Best Restaurant award by New York Magazine in 1992. Since then he has opened Bolo Restaurant & Bar in New York in 1993. In the same year he won the James Beard Foundation’s Rising Star Chef of the Year He opened Bar American in 2005 which focused on regional American cuisine, followed by his first steakhouse, Bobby Flay Steak in 2006, located at the Borgata Hotel and Casino in Atlantic City, and many others throughout the country. He opened a second Mesa Grill in Caesars Palace Hotel in Las Vegas in 2004. Here at Mesa Grill, you will find flavorful, innovative southwestern dishes such as a Blue Corn Pancake with Barbecued Duck and a habenero chile-star anise sauce, New Mexican Spice Rubbed Pork Tenderloin with bourbon –ancho chile sauce accompanied by a Sweet Potato Tamale with crushed pecan butter, and Green Chile Cioppino with lobster, scallop, grouper, mussels and served with a Blue Corn Stick and scallion butter. The dishes here at Mesa Grill all attest to those spicy, bold, colorful flavors that Chef Flay is known for.

Varying backgrounds, achievements, and specialties make each of these celebrity chefs unique in style. One thing they do have in common is their immaculate restaurant locations in Las Vegas. So if it's extra excitement you're looking for in your dining experience, check out one of the restaurants headed by these famous Las Vegas Chefs!